Hacked version, cheats codes - contact us: The United States of America (USA) New York City, 228 Park Ave S, NY 10003-1502
The lord of dragons:
Are you truly a gifted one? Your learning seems so limited, and you have so many questions. Now you have unwittingly found yourself thrust through a portal, unprepared and terrified. Lord Sallis, an elderly wizard form the order of the star accompanies you. He killed another acolyte so that you could tahe her place on this journey from Limbo to the fractured worlds, but you have no idea why.
The adventure begins:
After emerging through the portal in a blinding flash you survey the surrounding landscape. There are plains stretching to the horizon in all directions, with some twisted forests to the south. Everything is bathed in the purple tinted glow of the vortex. Below, at the base of a spiralling stairway there is a large circular enclosure with many doors. There you see lord Sallis discussing with a woman dressed in the robes of an alchemist.

Sallis turns to greet you, holding vestments and devices. “here acolyte, dress yourself as befits a wizard. Your staff is here also. Time is not on our side, so we must set out as soon as you are ready. Your first task will be to explore the surroundings. I will accompany you, but i will not join you in battle. This is where your training truly begins, but do not fear, i will guide you where i can.”

The ruins:
you enter the ruins of great buildings and high walls, strewn with rubble and overgrown with thick moss and vines. The architecture is unfamiliar to you, but you surmise that it was once a great temple complex. Sallis explains that the ruins belonged to the old world, before the cataclysm, and that a powerful ward spell would have kept the area largely intact as the world fractured into thousands of pieces. You are eager to learn more.
These ruins have already been plundered, and hence abandoned. However, if you do encounter ruins guarded by a wizard lord you can be sure that there is wealth and knowledge to be obtained there. First you must defeat the guardian wizard, and then you will win the prize. You must seek out such ruins where you can.

The three unicorns:
after a long day’s walk you approach a sprawling travellers’ inn with a large sign depicting three unicorns. This looks like an opportunity to relax, and Sallis accept your invitation. As you enter the bar the bustling conversations suddenly cease, with all eyes turned to Sallis. He simply nods and everybody resumes their activities as if nothing had happened. he buys two tankards of ale and you sit down to drink.

You leave Sallis to his beer and join the card game. The old wizard remains in the background, observing, but remaining absolutely quiet. After an hour or so you seem to be doing quite well, with a tidy pile of coins in front of you. Ypi glance at Sallis and he winks at you, but remains straight faced. You suspect that there might be magic involved in your good luck. After another few hours you retire ti bed with the nagging thought that you had something important to ask Sallis, but it has slipped your mind. You gain gold.

Hack cheats tutorial Chaos Reborn Adventures(wiki):
The wizard’s level and social rank are displayed on the left and victory points below (if VP battle).
Spells: Crystal wall - grows 4 hexes outwards in a line from the wizard’s feet, can trap creatures and destroy blob.
Disbelieve - dispel illusory creatures. Of successful you can cast again this turn. Disbelieve is not used up when cast.
Magic bolt - a powerful direct attack spell, with 3 hex range. Requires a clear line of sight. 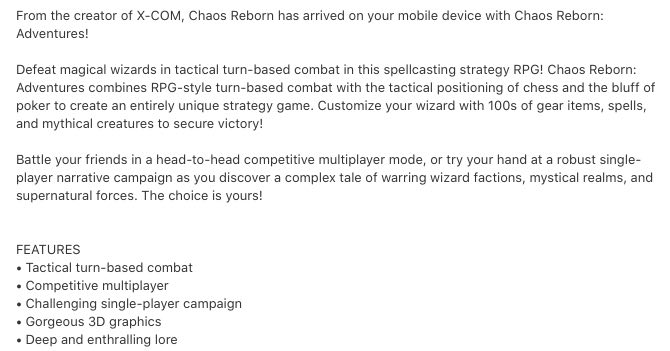