Welcome all, thanks for coming. As you all know, it's once again time for our national war games. We will smash our enemies in the name of peace and harmony, and become again the righteous defenders of freedom, justice and cheap indie games. For these first warm up missions, high command have ordered us to fight amongst ourselves. But that doesn't mean laser guns or aiming high – we play for keeps in this army. It's not about survival of the fittest though, it's mainly because our grunts are cheaper to replace than buying fancy kit! 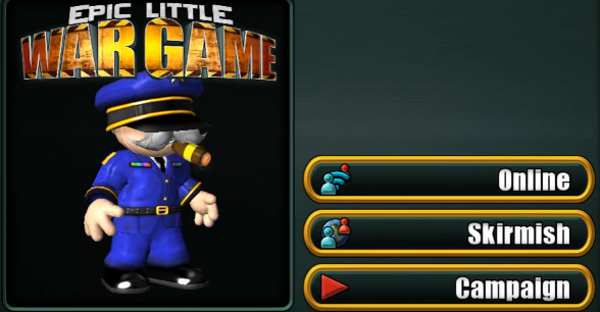 We're blue, they're red. Blue good, red bad. You know what to do... Select end turn when you're done. Use jeeps to quickly deliver infantry to key locations. Artillery units hate infantry and like dealing lots of pain to them from afar. Warning – weak armor. Engineers are used to take over structures. They carry no weapons, so a military escort is advised. Snipers are the perfect infantry killer. Get them to high ground to boost their range. Recon tanks can get to the action fast, but have relatively weak armor.

battle tank – love the front line so much they want to marry it and concieve its illogical children. Bazooka – powerful anti tank infantry unit. Supply trucks resupply units on the field with fresh ammo and fuel. Power station – generates power, if you tun out of power, your turrets stop working and you cannot create new units. Skeeter – these light recon tanks can get to the action fast, but can't do much when they get there. Chopper – all round bad boy of the air, this can attack all targets in range. Pounder – fixed defense that fires at all ground based enemies once per turn.