The war between Viblain angels and Niflheim devils... Despire the fierce battle, the war on the battlefielf, which is not caused by the sheer power of two sides, always repeats without a single winner. But one day, the devils of Niflheim are recived the news that ancient god's powerful legacy is hided in the Midgard, world of human. The devils are try to seize god's relic and change the thousand war between Vidblain and Niflheim. Therefore, the angels of Vidblain defend the relic against the devils. Vidblain determined to send female warrior valkyrie to the ground. But while the valkyrie making her way through the Heaven's door for execution of command, something accident happened to her. Finally, she falls to the ground with most of her power was lost with a help of blue eyed human who have be called by Vidblain, valkyrie recovered and went on the mission again. The mission valkyrie descended down to Midgard, powerless has to protect the legacy of the ancient god from the evil force until Vidblain would come down to support her...! 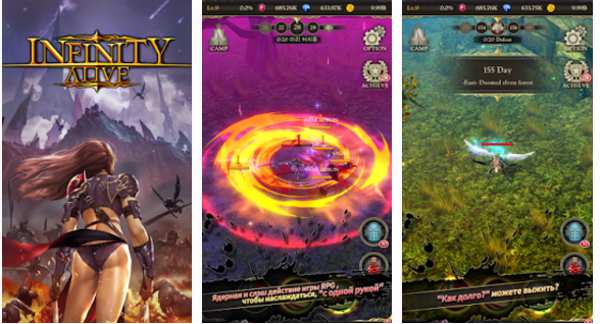 I had an order from the heaven to protect the artifact of the human world from the evil force. I was descending down to follow the order and my heavenly power got sealed. I do now know what happened after that. This is a cursed forest area. There are monsters around here, so let's defeat them. Your movement and combat would be running automatically. Monsters has the guts! Try using powerful cleave skill to defeat the enemy. Holy bullet – this is a special item that boosts your attack power and movement speed. Use the scared ore to wipe out the monsters. The monsters are showing up limitlessly. We need to defeat a powerful boss monster first in order to wipe out all the monsters! Our mission is to protect the artifact from the evil force.

Don't forget that previously defeated monsters would revive once you camp out. Let me briefly explain what you can do at the campsite. You can see newly obtained equipments and their information in your inventory. You can equip an equipment and ud upgrade it. So check them as often as you can. You can learn new skills and runes from the skill menu. Each rune has unique asset. Try combining various runes and skills to gether. In the artifact menu, you can obtain a artifact of sealed mysterious power and check its information. A artifact with a strong ability would belong to its user and can be stored permanently. Its user can use the power sealed in that artifact.