Hacked version, cheats codes - contact us: The United States of America (USA) New York City, 228 Park Ave S, NYC 10003-1502
It’s so good to go on a journey with my lord. The emperor has a price on Theodore’s head. Whoever kills Theodore will be awarded his cities. Why don’t we try? We’re living in a chaotic age. This is prime time for you to realize your ambitions. People are rushing ahead. Stay here and i’ll go check it out. Controls: move - tap to select target destination. Tap targeted destination again to confirm operation. It’s been a while since you fought on the battlefield, please allow me to explain how battles work. Now tap a cell as my destination. Remember to pick blue cells only!

Well done! Now we wait for the enemy to approach us. SHort ranged units can only attack enemies on neighbour cells. The enemies are close. I am a melee here, so i can’t attack until i step one cell forward. They are within my range! Let me give them the mortal blow! This is how battles work, i hope you’re familiar now.
This time allow me to introduce long ranged attacks. Long ranged units can only attack enemies at least one cell away. To perform long ranged attacks, we need to keep one cell space from our target. Please move me to one cell away from an enemy. 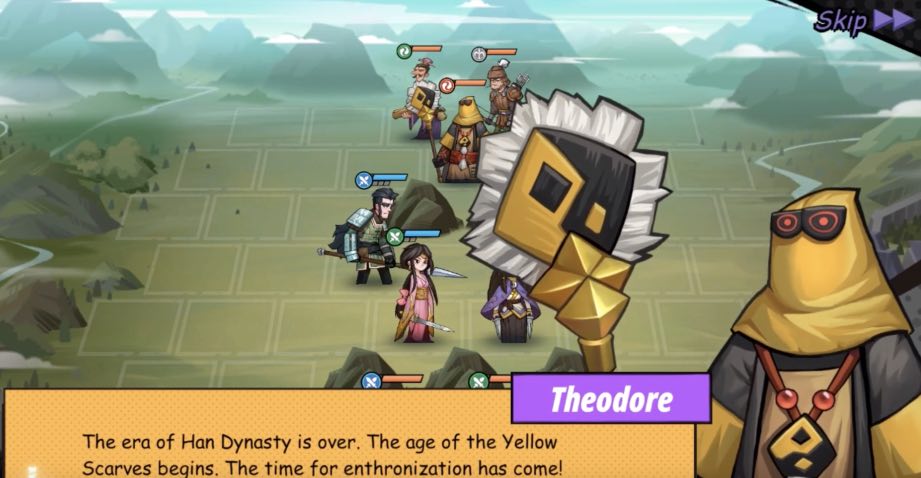 If we attack short ranged enemies from this position, they cannot counter attack! Element relationship: when the element is advantageous, ATK is increase +20%. When is disadvantageous, attack is decreased -20%. Destructible obstacles: some obstacles can be attacked and destructed just like enemies.
Thank you for joinin me in fighting against the Yellow Scarves. Just imagine what we could accomplish if more people were brave and ambitious like you. No general is born with achievements. We have to earn our victories one by one.